The Comedy of the Craft

Typical scenario:
“As the curtain rises, Harlequin is ill. The Doctor and his servant try to determine what is wrong. The Doctor, after much enticing, gives Harlequin a shot on his backside with a huge syringe. Harlequin is found to be pregnant and delivers three babies, one of which survives. Harlequin nurses and mothers the baby. He teaches the child to walk. Harlequin complains to the Doctor regarding the problems of rearing a child. The child is whipped by Harlequin. The play ends with Harlequin teaching the child to read. Throughout the play, Harlequin is made fun of by his friends.”1 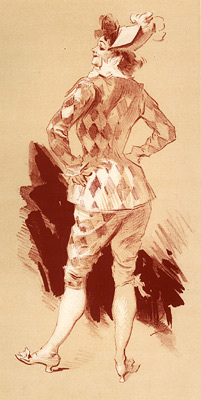 HARLEQUIN (Arlechino)- Perhaps the most well-known character. Witty, acrobatic, child-like and amorous. He wears a cat-like mask and colorful clothes. His prop is a bat or a wooden sword.
Hmmm, so like the Antipholi. But more like Antipholus of Ephesus.

BRIGHELLA- Harlequin’s sidekick. He is a cowardly villain who will do anything for money.
The Dromios come from this character.

IL CAPITANO- A caricature of a soldier; overly bravado. Tells bragging stories about his conquests; often Spanish.
This is most like Duke Solinus in the full text.

IL DOTTORE- A caricature of the highly-educated; pompous.
Dr. Pinch, anyone?

PANTALONE- A merchant. He’s retired, rich and greedily holds onto his wealth. He often has a young wife or a ballsy daughter.
"Comedy" features three merchants.

PEDROLINO- The forerunner of today’s clown. He’s white- faced and a dreamer.
Also the Dromios, more Syracuse than Ephesus.

PULCINELLA- A cruel bachelor who is usually physically grotesque that chases after younger girls.
This is not a character we see in "Comedy," perhaps because it is not wholly a love story.

INAMORATO- He wore no mask in order to be a better speaker. He is the handsome lover.
No character in "Comedy" matches this exactly, but Antipholus of Syracuse fits this the best.

INAMORATA- She is Inamorato’s female counterpart.
Luciana, the typical female lover character. Adrianna also shares this part, but Shakespeare makes her much more lively and feisty.

COLUMBINA- Inamorata’s servant, usually the beloved of Harlequin. She is witty and clever and a bit gossipy.
This matches Luce.

LA RUFFIANA- An old woman and a gossip. Her job is to thwart the lovers. (All names change depending on what source is looked at.)

Commedia is a form almost completely based on physicality. Traditional Commedia characters do also have vocal quirks, but are largely based on their actions and their costumes. Shakespeare took some Commedia archetypes, and revamped them to serve his purposes. It is interesting that "Comedy" aligns perhaps the easiest with Commedia characters and is also one of Shakespeare's first plays. That is to say, he was not yet qholly comfortable in his own style yet. Shakespeare, obviously, was amazing with words and added that element to the Commedia cannon.

So what does this have to do with the radio? The idea behind Commedia is the same as what a Lean & Hungry actor does: create easily identifiable characters who can be recognized by a single, simple factor. In the case of audio drama, this has to be a vocal quirk or quality. Thin of it as Commedia for the voice.

Another thing to think about is how to convey the slapstick, face-paced humor with foley and voice alone.
Powered by